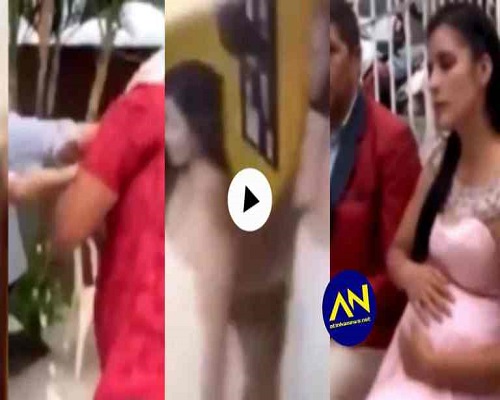 In a trending video online, Groom exposes bride’s affair during their wedding ceremony with proofs

Social media was abuzz recently, after a groom decided to use their special evening to expose an affair between his partner and another man, who was also there.

The news came to light after a Twitter user, @SixBrownChicks, posted a video of a man announcing his wife’s affair, which had been going on for 3 years, during his wedding reception.

He also had a lawyer with him, who was ready to present everyone with solid evidence to support his claims.

Based on the video, the man said he initially thought his spouse was 4 months pregnant, but he asserted that she has been carrying another man’s child for 6 months.

Through his lawyer, he presented medical evidence that he isn’t the baby’s biological father.

The groom stated, “My wife is pregnant and we’re expecting a baby. But did you know she’s 6 months pregnant, not 4? This is my lawyer, with proof that the baby isn’t mine. Also, the guy she cheated with is here. She’s been cheating for 3 years. This party is for them and not me.”

He then proceeded to show everyone a video footage of the lovers engaging in the affair, through a laptop. Eventually, all hell breaks loose as the attendees started assaulting the other man by throwing all kinds of objects and insults at him.