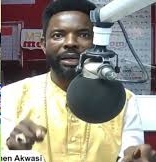 Ghanaian prophet Stephen Akwasi, popularly known as Jesus Ahoufe has been picked up by the police following his prophecy that Shatta Wale will be shot by some unknown assailants.

In a video which has since gone viral on the internet, a group of police officers stormed the premises of Accra FM in two pick-up vehicles and arrested the pastor who was scheduled for an interview with radio presenter, Nana Romeo.

In the said video, Jesus Ahoufe who was clad in white attire surrendered himself to the police and was subsequently taken away in one of the standby vehicles.

In September, Jesus Ahuofe predicted that Shatta Wale will be shot by some unknown gunmen on October 18, 2021.

In an earlier interview with Accra FM’s Nana Romeo, the pastor said God revealed to him that the Dancehall artiste will be shot dead a day after his birthday.

“On October 18, 2021, a big calamity will befall Ghana. Ghanaians should pray for our musicians, especially dancehall music performers. I saw in my vision that one had lost his life. What occurred on October 18, 2007, in South Africa is going to happen in Ghana. The person is a popular dancehall artiste in Ghana. In the spiritual realm, I saw that he was attacked by armed robbers and was shot dead. He needs to consult a man of God to pray and redeem him. I saw this while praying, but in Ghana, when you prophesy, you will be attacked. His first name is Charles. He should pray seriously”, he stated.

On Monday, October 18, Shatta Wale was reported to have been shot by some gunmen at East Legon in Accra and was receiving treatment at an unknown medical facility.

Hours after the police announced it has launched investigations into the matter, Shatta Wale in a statement issued on Facebook said the alleged gun attack was a prank.

In the statement, the dancehall artiste disclosed that his life is currently in danger and as such, has promised not to return until the laws in Ghana work.

In some parts of the statement, Shatta Waleaccused the police of turning a blind eye to the numerous prophecies about his death but only interested in his ‘fake’ shooting incident.

Source: www.ghanaweb.com
Related Topics:arrestedPROPHET
Up Next