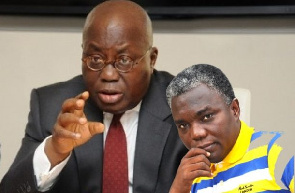 Why I pray for Akufo-Addo always – Prophet Francis Kwateng

Founder and leader of House of Power Ministry (HOP), Prophet Francis Kwateng has revealed why he does not get tired praying for the President, Nana Akufo-Addo.

According to him, Nana Akufo-Addo won his heart over his decision to stop illegal mining activities, popularly known as “Galamsey” in the country.

“I pray for Akufo-Addo always because of his boldest decision to protect our lands and water bodies”, he said.

The President, upon assuming office, placed a ban on illegal mining to release the pressure on the lands and water bodies as farmlands were destroyed, rivers and streams that provided potable water and fish were also contaminated.

But Prophet Kwateng who was talking about human’s respect for nature on Divine Hour, a religious program aired on Elijah TV, disclosed that God hates people who destroy the environment.

“We eat, inevitably, at the expense of other living creatures. How can we take the lives of plants and animals, and destroy our water bodies while maintaining proper respect for both ecosystems and the individuals who live in them—including ourselves?”, he quizzed.

Prophet Kwateng maintained that the citizenry should understand the President in his quest to protect the natural resources to make a good environment for agriculture since according to him, it is the only way God would bless the country.