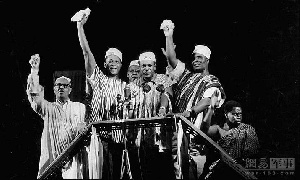 The famous photo of Osagyefo Dr. Kwame Nkrumah and his comrades Kojo Botsio, Komla Agbeli Gbedemah, Archie Casely Hayford and Krobo Edusei on the night of Ghana’s Independence Day celebration, is without a doubt, one of the historically valued photos of this country.

On that day, Nkrumah and his fellow Convention People’s Party comrades, stood at the Polo Grounds to declare that after more than a century of European rule in the country, Ghana had finally gained her independence and will be ruled by some of its own.

The night was a historic one for the newly-born country and anything done on the night symbolized something spectacular.

With the significance of the day, Nkrumah went for a traditional dress from the Northern Region known as Batakari.

Nkrumah was not the only one draped in Batakari, his disciples were also in various designs of Batakari dresses.

So Batakari was represented on the night, but what informed Nkrumah’s decision to wear an outfit that shone the positive light on the culture of tribes in the most Northern part of the country.

A historian known as Kwame Anokye has given a detailed account of why Nkrumah wore what is also known as ‘Batakari’ on the night of the event.

Read his account which he narrated on GTV below

“If you look at the map of Ghana, you’ll see that the colonial master consciously did the country of Ghana to look more or less like Great Britain. It was to be about the same size as the UK.

“In the north, was the savannah where they will have the animals and videos they needed. In the middle belt like Ashanti and Brong Ahafo, that will be the food belt. In the south, they will get the cocoa and all the things they needed here.

“The whites consciously started education in the south and when they started schools in Cape Coast, they realized that the Fantis had become sophisticated and would not want to come under the colonial masters. What they did this time was to make sure there was no education in the North so there was an imaginary line between the North and South.

“At the time, we were fighting for independence, the Asantes said that before the white people came, nobody ruled us so if the white man is going then we needed our freedom back. Trans-Volta Togoland joined after the First World War.

“The Ga people were saying everybody should leave our land so Nkrumah had to find a way of bringing the people together. He discovered that the Northerners led by Dombo and others had formed the Northern People Party and their focus is that, because there was not development in that area, they felt they were 300 years behind the southerners so did not want to be part of the new Ghana.

“Nkrumah had to go there and convince them that if you vote my party and join the country, we will bring development to your area. So to identify with them, he wore the Batakari on independence day as a sign of keeping to his promise.”

‘Gay’ Prophet banished for having oral sex with Church members