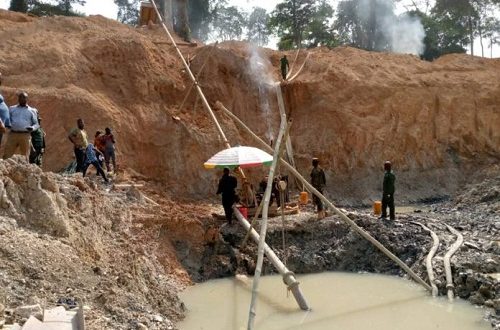 Y’asem Nie: Inside the dark world of ‘galamsey’ and rituals; an operative’s account part III [Audio]

Kojo Owusu, the former child illegal miner who has been sharing his story on Adom FM‘s Dwaso Nsem has continued his narration with some even more horrifying details.

Mr Owusu has given an account of how his fellow illegal miners, known locally as galamseyers, resorted to seeking the help of ritualists in their pursuit of more gold.

According to Mr Owusu who is popularly known as Opooman, it is difficult for anyone to engage in illegal mining without some form of spiritual protection.

Continuing his story on Adom FM’s social discussion segment Y’asem Nie on the Dwaso Nsem show, Opooman said at a point, some of his colleagues were given live snakes to put in galamsey pits for ritual purposes.

The snakes, he recounted, were spiritually scheduled to bite fellow galamseyers so that the blood that oozed from the snake bites could lead to the discovery of more gold.

“If you are not lucky and you die, that would mean luck for the person who may have consulted the ritualists because it meant more gold for him and we had many of such cases,” he narrated.

“There are a lot of snakes in the galamsey pits but you hardly see them because visibility in the pits is poor due to poor or no lighting. We bury fellow miners all time,” he added.

Opooman who is now a successful businessman who deals in car tyres at Obossey Okai in Accra said life as an illegal miner wasn’t easy but it came usually with fast wealth.

According to him, a rude awakening that was occasioned by hunger when his galamsey money ran out was what changed his life.

As a result of the difficulties encountered in life, Mr Owusu aka, Opooman, has become a philanthropist who has been distributing food and other essential items since Covid-19 broke.

You may listen to the audio above for more of Opooman’s narration.