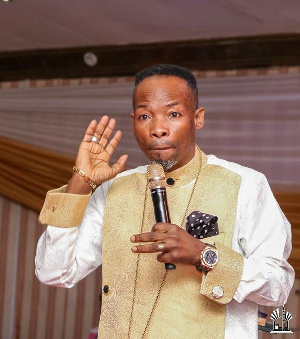 Leader and Founder of Alive Chapel International, Archbishop-elect Elisha Salifu Amoako has descended heavily on the Chairman of the Pentecostal and Charismatic Council, Rev. Paul Frimpong-Manso.

The man of God who seemed outraged by the latter’s comment over prophecies said that God has been speaking to his prophets through prophecies and that there is no way he can downplay prophecies from men of God.

Addressing the leadership of the National Democratic Congress(NDC) led by flag-bearer John Dramani Mahama after the ex-president paid a courtesy call on members of the Christian Council of Ghana and church leaders at the Assemblies of God Church to formally introduce Prof Jane Naana Opoku-Agyemang to the President of the Ghana Pentecostal and Charismatic Council, Rev Prof Paul Frimpong-Manso tagged men of God who make prophecies about election results as fake and false prophets.

He thus admonished Mahama and Prof. Jane Naana Opoku-Agyemang to ignore such persons since they only seek to prey on them and use them as milking cows.

“There has been a practice of people prophesying about elections. I want to say in no uncertain terms that these things are wrong, false, and fake, and we should not bank our hopes on them.

“God has given the power to choose the leader through elections, campaigns, through the ballot box. If it will be through prophecies, there will not be the need for elections and campaigns and ballot boxes. Dear politicians these people can exploit you, they can create confusion and they will make things wrong,” he noted.

But speaking On Okay FM’s ‘Ade Akye Abia’ programme, he explained that Rev Prof Paul Frimpong-Manso did not speak well.

“. . If he says one should not believe the Prophets it means he wants to look down on the prophetic office . . . maybe he is ignorant about the prophetic ministry, because if something is not your office you might intend to blackmail it . . . ” he said on Okay FM.

According to him, Rev Prof Paul Frimpong-Manso said all those things to impress the man (John Mahama) to gain some favour.

He said way back in the 2000s God spoke to his prophets about elections, so for him to condemn such acts is wrong and does not speak well of him.

He explained that on the 31st of December last year Watch Night service, he prophesied about President Nana Addo Dankwa Akufo-Addo‘s second term and nothing is going to change about that.

“When I look into the spiritual realm, nothing has changed, the President and NPP government will retain power,” he added.

“We have received prophecies like this and they all came to pass so nobody should think it’s because of our affiliation to any political party.”

He, however, vehemently denied his alliance with the ruling New Patriotic Party (NPP).

“No political party has ever paid me or provided school fees for any of my children, no one pays tithe to me.”

“We know some men of God who have benefitted greatly from some political parties yet they go about hypocritically condemning others,” he emphasized.