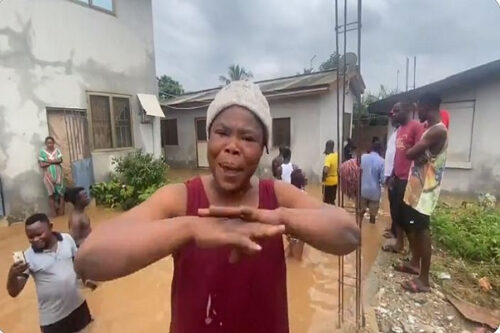 Some residents at West Lands in the Ayawaso West Wuogon Constituency who were affected by Saturday’s heavy downpour have berated the local assembly’s stiff resistance to help from an aspiring member of parliament for the area, some months ago.

“They told me to stop the work that I’m doing and report to their office so that I formally seek permission to dredge the gutter in West Legon,” he said in an interview.

However, the drain, which according to residents has since become a bane to their development has been left unattended to after Mr Dumelo was ordered to stop work.

After over 4 hours of torrential rains in parts of Accra on Saturday, most residents in the area in question were rendered homeless as their homes were filled with floodwaters.

Affected residents explained in a video shared on Twitter by Mr Dumelo that no member of the Assembly or the Member of Parliament, Lydia Seyram Alhassan has visited the area.

A resident ranted; “John Dumelo began working here but they came to stop him…yet they didn’t even help us after stopping him. Now look at how we have been submerged in the flood. We need help now…we’ve changed our minds now because the authorities have no help for us…”

“Anytime it rains we suffer…even the sitting MP wasn’t able to visit us here because she wasn’t able to access the bridge. They have no respect for us here…,” another added.

On June 10, John Dumelo began facilitating the dredging of a big gutter at West Legon. The decision to start work on dredging the gutter, he said, was informed by a promise he made to the community when he paid a visit to assess the discomfort residents face whenever it rains.

(Below are more reactions from residents as they vented their spleen on social media):