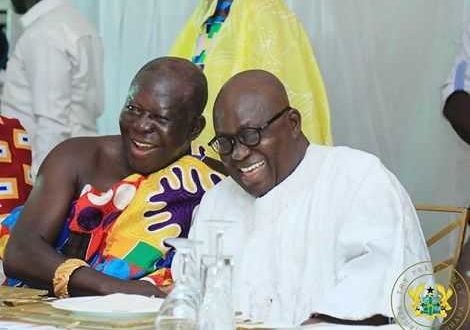 President Nana Addo Dankwa Akufo-Addo has said the Ashanti region will get its fair share of the national cake in the next four years of his government.

He was speaking at the Manhyia Palace when he joined Asantehene Otumfuo Osei Tutu II to celebrate the first Akwasidae of the year.

President Akufo-Addo thanked electorates in the region for giving him and the NPP massive votes in the December 2020 Presidential and parliamentary poll.

He also noted that per the outcome of the Parliamentary polls, Ghanaians want the governing NPP and the opposition National Democratic Congress (NDC) Parliamentarians to work together to ensure the progress of the nation.

He said: “I’m here to thank Otumfuo and the people of Asante for your massive vote and support for me and the NPP party. The four more years you’ll have your share of development but the most important thing is unity.

“What the election thought us is that Ghanaians want NPP and NDC to work together especially in parliament and that is what I want us to do to move the country forward,” he added.