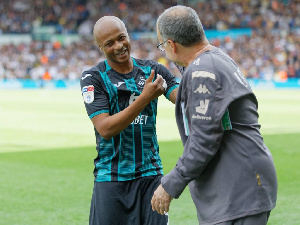 Ghana captain Andre Ayew has been linked with a move to Leeds United where he could reunite with his former manager at Olympique Marseille Marcelo Bielsa.

Ayew is currently unattached after leaving Swansea City at the end of the season.

His departure has seen him attract interests from several clubs including Scottish giants Celtic and Turkish powerhouse Fenerbache.

Another club showing interest in the versatile forward is Leeds United who finished last season in a respectable 10th place following their return to the English top-flight.

But to keep their place in the Premier League for another campaign, the Whites have spotted Ayew as a good addition due to his experiences with Swansea and West Ham United.

His relationship with Marcelo Bielsa is believed to be a key factor in a possible switch.

Ayew scored 17 goals last season as Swansea City reached the play-offs finals before disappointingly losing out on promotion to Brentford.

The 31-year-old arrived in Ghana last week to lead his teammates in the international friendlies against Morocco and Ivory Coast.