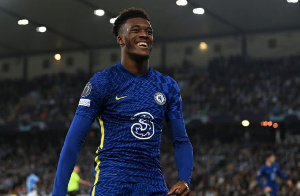 Ghana target Callum Hudson-Odoi has failed to convince his coach at Chelsea Thomas Tuchel but the club cannot sell him too.

The winger who burst onto the scene with some much promise has failed to shine or get near close to what is potential could be.

At a point Chelsea had to fight off interest from German giants Bayern Munich who were ready to splash as much as 80million pounds on the young winger.

Chelsea had to reward his loyalty with a huge weekly wages and a promise of first team football but Odoi has failed to kick on like his contemporary Phil Foden of Man City.

Injuries have not helped the youngster whiles there is a real battle for positions at Chelsea which has often seen him on the bench.

The youngster did not play any part for Chelsea since March as he was injured.

With his hefty weekly wages and apparent lack of fitness it is difficult to see any suitors coming for the 21 year old winger.

Callum Hudson-Odoi is likely to stay at Chelsea next season and try and fight for a place in the team.