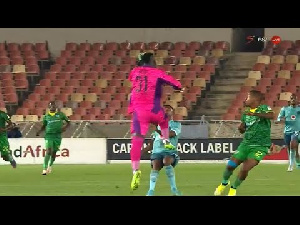 In an attempt to protect their goal, goalkeeper Richard Ofori and teammate Paseka Mako went for the same ball, with Ofori acting as a sweeper keeper.

However, the situation became complicated when Ofori, in his attempt to head the ball away, collided with Mako, who was facing his own goal.

Mako collapsed and required rapid medical assistance on the field nearly immediately after the incident.

Mako was originally unresponsive but recovered consciousness before being taken to the hospital by ambulance.

Mako had sustained a concussion, according to the Pirates medical team, who subsequently told SuperSport TV.

Pirates captain Happy Jele in consultation with the referee agreed that the game should be called off 10 minutes earlier since the players were obviously not in a stable mood to continue.