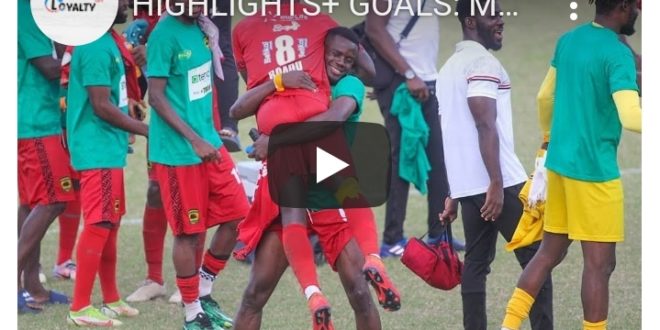 Asante Kotoko returned to winning ways after enduring a difficult run in their last few games in the Ghana Premier League.

The Porcupine Warriors who had won just one of their last five matches in the league ensured they ended their poor run of form by beating Medeama away.

The two-time African champions inflicted a 2-0 win over the Yellow and Mauves at the Akoon Park on matchday 31 of the domestic top-flight on Sunday.

Goals from Andrew Appau and red-hot Frank Mbella ensured Kotoko secured all points at stake to extend the point gap between them and the Tarkwa-based club.

Kotoko had to play the entire second half with ten-man due to Mudasiru Salifu’s red card in the latter part of the first half.

Despite the playing with ten-man after the break, Prosper Narteh’s side never stopped fighting as they picked the maximum points to better their chances of winning the league title.

Medeama have dropped to the third position after suffering defeat whereas Kotoko opens a nine points gap at the summit.

The Porcupine Warriors have now accumulated 59 points and with three matches to go, the Kumasi-based club can clinch the title with a little push.