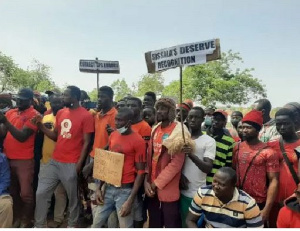 Members of a group calling itself the Concerned Sissala Movement in the Lambussie District of the Upper West Region have embarked on a demonstration over what they describe as neglect of development by the successive governments for the past 16 years.

The Lambussie District which was created in 2007 is the only District out of the eleven districts in the Upper West Region without tarred road, TV3’s Yakubu Abdul-Gafur reported.

16 years after its creation, the district is still challenged with a lack of development issues, a situation that compelled hundreds of demonstrators to hit the streets.

Some of their grievances as indicated on their placards include fixing the road, correcting GPS error, Encroachment of land, poor health care system.

The group moved through the streets of Lambussie to the Community Day Senior high school before they returned to address the media.

Convener Sylvester Boyuo in his address to the media said although the government has good intentions with the introduction of the digital address system, some government officials have registered a chunk of Lambussie properties in favour of Nandom.

Regarding the roads, he indicated that all the deplorable nature has turned them into death traps.

The group has given the government up to December 31 to address the issues if not they will organize another demonstration.

Source: 3news.com
Related Topics:Lumbussie
Up Next

Policeman commits suicide, ask colleagues to use funeral contributions to settle his debt