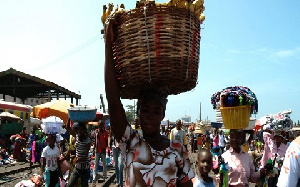 A 12-year-old head Potter, Ms Sumaiya Ibrahim, has appealed to individuals and organisations for assistance when schools re-open in January 2021, after the COVID-19 pandemic forced her into Kayaye.

The teenager, who is being raised by a single mother comes from Walewale in the North East region, but was obliged to migrate to Accra to engage in Kayaye following the coronavirus outbreak and the subsequent closure of schools countrywide.

She told the Ghana News Agency in an interview that she earns little as a Kayayoo and that people who needed her service paid as low as GHC1.00 for any bulk stuff she carried.

The situation, she said was making it extremely difficult for her to survive the high cost of urban living.

She sobbed, while narrating her life in Accra, saying, “I’ve lost my dad and my mom is unemployed. Life is hard for us in Walewale but it’s harder here in Accra.”

“The money I make is what I use to eat. I often earn too little. It is insufficient to save. I want to be a nurse so that I can help people,” she added.

Ms Sumaiya said she migrated with her elder sister to Accra in search of greener pastures because of the closure of schools due to the Coronavirus, which infected over 45,714 with 294 deaths, though 44,896 had since recovered from the virus.

“I live with my fellow Kayaye at Mallam Atta market, however, I come to work in the Nima Market on Wednesdays since it’s a market day.

According to Sumaiya, she and her elder sister were the only children of her parents.

Kayayei or Kaya Yei is a Ghanaian term for a female porter or bearer. Many of the women migrated from rural communities to Ghana’s urban cities in search of work.

They generally carry their burdens on their heads.

Ms Sumaiya who is a primary four student in Walewale is one of them, although she could not mention the name of the school, she is attending, but kept saying: “I want to be a nurse to help people.”

She pleaded with philanthropists, non-governmental organisations and the Government to extend their utmost support to Kayaye girls to cope with urban life.

7 ways to deal with sexual urges in a celibate relationship