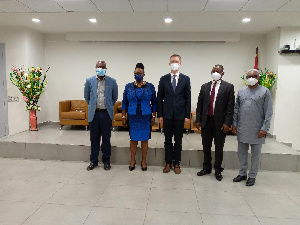 The Ministry of Health (MoH) on Tuesday received medical equipment and consumables from the German Government through the Deutsche Gesellschaft für Internationale Zusammenarbeit (GIZ), as part of its contribution towards efforts to strengthen Ghana’s health system.

Mr Hans-Helge Sander, the Deputy Head of Mission, who presented the items to the Ministry, said in addition to the donated items, 20 key medical personnel including anaesthetists and intensivists from the beneficiary hospitals, would undergo a two-day initial training for the proper use of the ventilators and other medical equipment donated.

Mr Sander said the world was experiencing extraordinary times as the COVID-19 pandemic continues to affect global health systems, with even countries with well-equipped infrastructure not being spared.

He said at the beginning of the pandemic, Ghana had about 200 ventilators, which were equivalent to one ventilator per 146,701 citizens, but although the continent had not experienced as high cases per capita as Europe and North America, yet with the recent reports showing a rise in active cases, it appeared a third wave was inevitable.

The German Government through GIZ had earlier donated various medical and other supplies including equipment for Intensive Care Units, Personal Protective Equipment and food packs to encourage and protect frontline healthcare workers.

Mr Sanders stated that although measures were being put in place to ensure a lasting solution to curb the pandemic through vaccinations, the current vaccination rate on the African continent called for emergency preparedness measures and provisioning of health facilities with infrastructure and personnel during and after the pandemic.

Mr Sander also said preparations were also underway for the shipment of the 1.5 million doses of COVID-19 AstraZenica Vaccines promised to Ghana by the German Government, and it was hoped to support the efforts at achieving Ghana’s 20 million vaccination target by the close of the year.

Ms Tina Gifty Naa Ayeley Mensah, the Deputy Minister of Health, thanked the German Government for the continuous support to Ghana health and other sectors of the country.

She said the donation showed how committed the German Government was in ensuring that the health of persons living in Ghana were protected accordingly, and gave the assurance that the equipment and other provisions would be utilised effectively and efficiently to enhance healthcare.