Home / SPORTS / Hearts, Kotoko fans clash over who has unveiled the best kits for the season 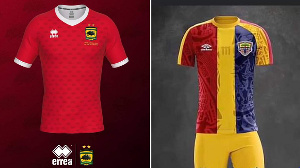 Hearts, Kotoko fans clash over who has unveiled the best kits for the season

Fans of Ghana’s two most glamorous clubs, Accra Hearts of Oak and Asante Kotoko, have clashed on social media over who has unveiled the best kits for the season.

Hearts’ new jersey, on the other hand, was unveiled on Friday, September 9, 2022. The home and away kits were designed to commemorate the club’s 111th anniversary.

The club was founded on November 11, 1911, and will celebrate its 111th anniversary in November 2022. As a result, both the home and away kits, as well as the goalkeeper’s kits, feature shades of the club’s trophies.

On the back of the unveiling, fans of both teams have been defending the beauty of their respective jerseys.