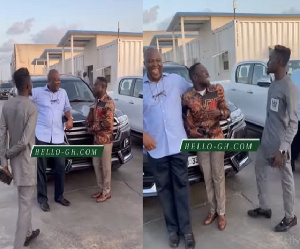 Obviously one of the happiest moments in their lives this year, if not the best – was a meeting with Ibrahim Mahama, a Ghanaian businessman, and the founder of Engineers and Planners, the largest indigenous-owned mining company in West Africa, and the owner of several other businesses in Ghana including Dzata Cement Limited.

With infectious smiles and uncontrollable laughter, actors Kwadwo Nkansah LilWin, clad in a grey kaftan and Clement Bonney (Mr Beautiful) who donned an African print with brown pair of shoes to match, communicated their mood as they were captured in a video with Ibrahim Mahama at his Dzata Factory.

The trio, standing in front of a car, could be seen and heard having a nice time although it remains unclear their mission at the factory.

An encounter with Ibrahim Mahama, it appears, is not just a moment to relish but one that leaves a lasting impression on the minds of people.

Speaking with GhanaWeb TV’s People&Places recently, Ibrahim Mahama the artist described how beautiful it was for him when he met businessman Ibrahim Mahama.

“Interestingly enough, for the first time, we met and it was interesting. I think that he’s one of the most generous people I have ever met and we had such beautiful conversations.

“I think the problem is that because he’s known to be Ibrahim Mahama, the brother of John Mahama, and also for being rich, a lot of people don’t really take time to know him [the person he is] and so today when I met him, it wasn’t so long, but I got a glimpse of him in terms of his honesty,” the artiste said.