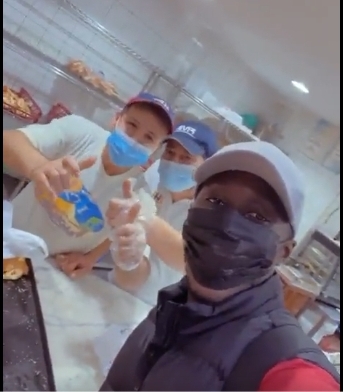 A Ghanaian photojournalist, Samuello has revealed how he was served free food in Qatar after mentioning Asamoah Gyan‘s name during a conversation as his countrymen.
Samuello, who is a FIFA accredited photojournalist was in Doha last month to cover the FIFA Arab Cup.

According to him, he met some Egyptians at a bakery shop in Doha and was surprised at how he was treated after Gyan’s name popped up.

“I’m here to remind y’all that @ASAMOAH_GYAN3’s name is a whole currency on its own!!” he wrote.

“So I went to this Bakery in Doha where I met fellow African brothers from Egypt. We had a brief sporty conversation and just at the Mention of Asamoah Gyan’s…. didi freeee. Legend.”

Asamoah Gyan is one of the most decorated African footballers in the world.

The former Sunderland and Al Ain striker holds a series of records, including being Ghana’s all-time top scorer with 51 goals.

He was also the country’s first player to score at the FIFA World Cup and remains Africa’s leading scorer at the global showpiece with six goals.