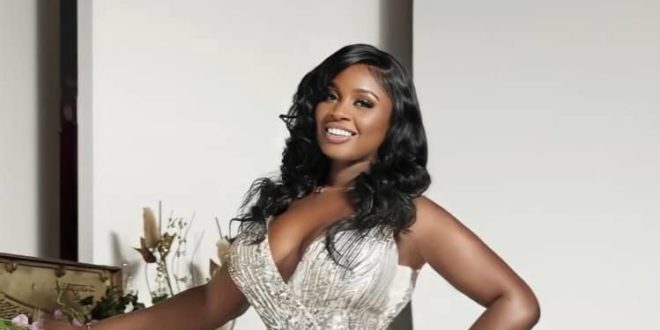 I am better prepared for films in Hollywood – Princess Shyngle

Multiple award-winning Gambian actress, Princess Shyngle, says her established and glittering career in the African film industry has prepared her adequately for films in Hollywood.

The curvaceous Banjul-born
actress who has starred in a number of films in Ghana, aside acting in her native Gambia, made this known in an interview with The Source.

Asked whether she was convinced that her established career in Africa has prepared her for the film industry in the US, Princess Shyngle says: “First of all, I want to thank you for having me. It’s such an honor. I have been acting in Africa for more than ten years, with over 30 films and over ten awards under my belt; I will say apart from my talent, my established career in Africa has prepared me for films in Hollywood in terms of experience, commitment, professionalism, the ability to work hard under pressure, I’m a great team player, humble, confident and passionate.”

Below we reproduce the original interview:

The Woman, the Myth, the Legend… Princess Shyngle of Gambia. Thank you, Princess, for sharing your insights with us, and WELCOME TO AMERICA!

Los Angeles and Hollywood have been known as a mecca for acting talent over the last 100 years, with actors coming from worldwide to seek their fame here. How do you feel your established career in Africa has prepared you for the film industry here in the US?

First of all, I want to thank you for having me. It’s such an honor. I have been acting in Africa for more than ten years, with over 30 films and over ten awards under my belt; I will say apart from my talent, my established career in Africa has prepared me for films in Hollywood in terms of experience, commitment, professionalism, the ability to work hard under pressure, I’m a great team player, humble, confident and passionate.

You’ve worked with notable talent over the years without singling anyone out; who are your top three choices of actors and/or directors that you would love to work with in the future, and why?

I honestly have a book full of top actors and directors I would love to work with, but if I have to choose my top three actors, I’d love to with:

Reasons are simply because they are great talents, inspirational, intelligent visionaries, and they go all out in bringing a role/character to life.

If it weren’t for acting, what do you feel your chosen career path would have been?

If not for acting, I would be a full-time business and real estate mogul.

Would you still be focused on your foundation, or would you be incorporating that with something else?

The Princess Shyngle Foundation focuses on helping the poor and underprivileged in Africa, especially in my country, The Gambia, Ghana, and Nigeria ( food, financial aid, books, face masks, gloves, and hand sanitizer). I plan on expanding my foundation in the future to help and be a voice for the LGBT community in Africa.

Why is acting so important to you? Is there a specific memory that you can reflect on that impacted you so much that you said, ‘this is my path?” If so, what was that?

Growing up, I was a very shy girl, and being in front of a camera was impossible; as a kid, I wanted to be a lawyer or a businesswoman but never an actress, but God had different plans for me. So late 2009, I accompanied a friend for an audition for a reality show called “The Next Movie Star Africa.” I went with her for moral support; when she wasn’t selected, she convinced me to try, I did it just for fun, and I got selected to represent my country for the reality show in Nigeria. Out of 30 other African countries, I emerged as the 2nd runner up, and that’s just how my career in acting started. Acting is essential to me now because it’s a God-given talent, it’s a career God chose for me, and I absolutely love every bit of it. I never learned acting, never went to school for it or trained for it; I just read my first script, and it came naturally to me, and I can’t wait to showcase my God-given talent to the world.

What do you want to accomplish in the next three years with your acting career? And with your foundation?

I hope to be the most sought-after, award-winning actress, writer, producer, fashion icon, and humanitarian with at least four successful blockbuster films in cinemas in the next three years. I would have expanded my foundation by using my voice as the first openly bisexual African Actress for the LGBTQ community in Africa, giving them all the support and help I can and creating awareness for everything we go through in Africa.

What is the single greatest message you want to share with your fans?

Never give up; believe in yourself and your dreams no matter where you are, no matter your situation and conditions; never give up on your dreams. Be confident, be honest, be humble, work hard and never forget to put God first. Nothing is impossible.

What was the most challenging character/role you have ever had to play, and why was the role such a challenge?

I have never come across a role that I find challenging, honestly. All the roles/characters I’ve played in my films came easy for me and easy to interpret. I can’t wait to find a challenging role in Hollywood. I’m up for it all.

What makes you a good scene partner?*

I am a great scene partner because I’m very professional; I take my time to get to know my scene partner, especially if we have numerous scenes together or romantic scenes together, to get them to be comfortable with me so we can have great on-screen chemistry, I never have issues with my lines, I am genuine, sincere, friendly, humble, always on time and a great actress.

*If someone was going to make a film about your life, who would you choose to play your character?*

I would love Lupita Nyong’o to play me.

*Have you performed on stage as well as on film? Which do you prefer and why?*

Yes, I did play a few times on stage back in Ghana when I just started acting. Still, I prefer acting in films rather than on stage simply because a film usually reaches thousands to millions of audiences. In contrast, stage performances are very limited to the audience to watch you.

*Who do you feel is the funniest person in the cast of real life?*

I feel the funniest person in real life is my dad.

My perfect Sunday afternoon is me cooking my favorite African food, drinking wine, and watching true crime shows all day.

What advice would you give someone looking to break into the Entertainment industry in LA/Hollywood?

My advice will be just to be yourself, be original, be authentic, and be prepared for many disappointments and “No’s,” but don’t you dare give up because nothing good comes easy.