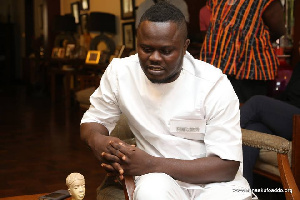 I am going through hard times – Cwesi Oteng finally admits

Award-winning musician, Cwesi Oteng, has said he regrets openly declaring his support for the New Patriotic Party in 2020.

The ‘God Dey Bless Me’ artiste joined the tall list of Ghanaian celebrities who declared their support for Nana Addo Dankwah Akufo-Addo when he was running for his second term.

However, in a recent interview on Hitz FM, he said, “Openly declaring my support for a political party came with some regrets. I thought Free SHS was something to commend but it ended up being crap in people’s eyes.

“I am going through hard times. Very difficult times. I won’t say the government has failed but I think things can be done better. People are saying exactly what they are feeling. They are going through the situation. They are not trees.”

Before admitting to the serious economic hardships in the country, Cwesi Oteng expressed his support for the E-Levy.

In the interview, he claimed that he feels happy whenever he is taxed by his service provider.

The gospel artiste said the country is so divided so much that one finds it difficult to express their opinions about anything because if they do, they are tagged members of political parties.

He explained that this, however, has got nothing to do with him fighting for what he believes in.