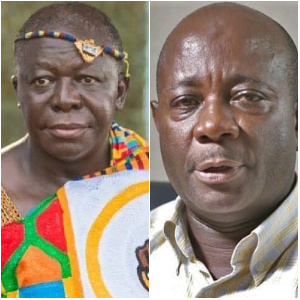 I am sorry – Odike renders apology to Otumfuo

Founder and leader of the United Progressive Party, Akwasi Addai Odike has apologised to the Asantehene, Otumfuo Osei Tutu for his recent comments on illegal mining activities.

The politicians recently courted disaffection in a section of the media after stating that some chiefs in the Ashanti Region were complicit as far as illegal mining in the region was concerned.

He was subsequently banished from the region while the radio station on which he made the remarks was asked to shut operations for a day by the Manhyia Palace.

According to Odike, despite retracting any wrong statement he has made against the Otumfuo, he remains relentless in his fight against illegal mining activities.

“If there is any part of my statement that didn’t go well with you, I retract and apologise,” Odike said during an interview with host of Onua Maakye, Captain Smart on Monday, September 12, 2022.

On the attacks he has received following his outburst on the effects of galamsey activities in the Ashanti Region, Odike described his attackers as cowards while emphasising that he is unrelenting in his quest.

“I have suffered a lot of attacks but I will continue to talk. I will continue to fight for Ghana till the last drop of my blood. So those who are seeking to intimidate me and attacked me with guns should brace up because you will not threaten to kill someone who is raising issues of national concern if you are not a coward,” Odike said.

The politician in a recent radio interview called out the Manhyia Palace and chiefs in the Ashanti Region for looking on for galamsey activities to fester.

His criticism was not received well by the Manhyia Palace which performed traditional rites to banish him for ‘’denigrating’’ Ashanti chiefs.

Tags AM APOLOGY I ODIKE OTUMFUO renders SORRY to