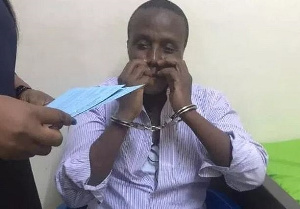 Gregory Afoko, one of the two persons standing trial for the murder of the New Patriotic Party’s Upper East Regional Chairman Adams Mahama has through his lawyers denied knowing one Robert Atule, a Prosecution Witness in the ongoing trial.

The witness, who is the State’s sixth witness, said he is a friend to Afoko and like brothers in the Bolgatanga Estate where they both lived until the incident of May 20 that led to the death of the late Mahama.

While being led by the Chief State Attorney Marina Appiah Opare to give his Evidence-in-Chief, the witness said, he met with Afoko a day before the incident who had expressed to him (witness) the grudge between his elderly brother Paul Afoko, the National Chairman of the NPP then and the Regional Chairman.

The witness said, acting as a senior brother to Afoko, he asked him to come over to his office to calm him down if he had in mind of doing something untoward, but the witness said Afoko never came as agreed.

Under cross-examination from Lawyer Stephen Sowah Charway, holding brief for Osafo Buabeng, put it to the witness that, he does not know Afoko anywhere, but the witness disagreed saying “I know him and we know ourselves.”

Counsel further put it to the witness that, his testimony to the court about meeting Afoko somewhere on May 19, 2015, a day before the alleged acid incident was never true and it was an after taught.

To this end, counsel ended his cross-examination of the six witnesses who were subsequently discharged by the court for the next witness to be called on June 24.

Meanwhile, the Lawyer for Afoko has concurred with the state’s request to the court to remand the accused persons to the Nsawam Prison custody.

The accused persons have been in the custody of the National Investigations Bureau.

According to counsel, his client, who has had surgery on his arm is having his health deteriorated at the NIB custody and wants his client transferred to the Nsawam Prisons where he can have enough ventilation and move freely.

According to him, “considering he is almost held in low ventilation at NIB custody, we believe sending him to Nsawam to enjoy some fresh air and walk around will benefit him,” and prayed the court accordingly.

Even though counsel for the second accused person Andrew Kudzo Vortia preferred his client to be in NIB custody for easy accessibility, the court said bo5th accused persons should be moved from the NIB custody to Nsawam.

The case has been adjourned to June 24.