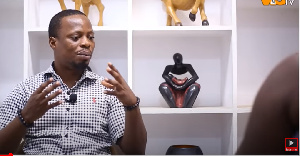 A young woman who identifies as Winnie has disclosed that she has killed her husband’s manhood because he cheated continuously without remorse or shame when he was caught.

According to the woman in an interview with YouTuber, Arnold Elavanyo, she is plagued with guilt after taking her husband to the native doctor.

“I have been married for seven years and I have two kids. I have always lived with my husband, we stay together. We started dating when I was in high school. He was my high school boyfriend and then he became my husband.

“I have never seen or been with any other man. We got married and we’ve been through a lot. We lived a happy life together and suddenly he started cheating.

“This man became a chronic cheat and I couldn’t understand why. I never saw him with any woman before. He started cheating right after I gave birth to my second child. I don’t know if it was because my body changed or something,” she said.

The woman claimed that her husband’s cheating habit pushed her to take a friend’s advice; to destroy his manhood after several times of catching him in bed with other women.

“So, I did the unthinkable. Hmmm…a friend of mine introduced me to this native doctor and when I went there, I wanted to go for a love potion so he could love only me, but this native doctor gave me other options, so, I opted for this particular one to destroy his manhood,” she added.

She also added that although her husband was caught in the act, he always showed no signs of guilt but instead shouted at her as if she was wrong for confronting him.

“I always caught him in the act, and he has no regrets or remorse when you question him. He just felt like doing it and you can’t ask him. He is the authoritative type and I am one person I respect my husband a lot.

“No matter what I wouldn’t want to anger him more so he wouldn’t go out and not come back. I got tired of it. I got so tired of it and I talked to friends and family and they told me, ‘why don’t you leave him?’

“I can’t leave him and we have been through a lot together and we have two kids. I can’t start all over again,” she noted.