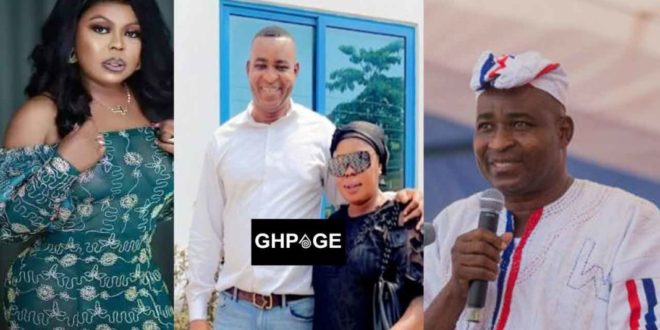 Afia Schwar has once again taken a deep swipe at Chairman Wontmui in a new trending diss video that has received massive engagements on the internet.

For the past few weeks, Afia Schwar has been making headlines after she first dissed Chairman Wontumi and later resurrected her long-standing beef with Delay.

Prior to these wild allegations against Chairman Wontmi, Afia Schwar had earlier insulted Ashanti Region NPP delegates for re-electing the loudmouth politician because he ditched her to hire her arch-rival Delay.

It is now clear that Afia Schwar really had something intimate with Chairman Wontmui sometime ago because she can’t be dragging his name in the mud all the time if nothing ‘romantic’ went on between them.

In Afia Schwar’s latest attack on the Ashanti Regiak NPP chairman, Afia Schwar fumed that she regrets ever having an affair with him because she got nothing in the end.

As bitterly complained the comedienne, Chairman Wontumi is the only man who apparently gave her nothing during their sexcapades and she still regrets ever accepting to date him.

She went on to mock Delay for working for her ex-boyfriend by bragging that she still remains her madam because they are not on the same level.

Meanwhile, Afia Schwarzenegger has taken a dig at Delay after she broke down into tears while hosting her ‘To Wo Bo Twi Me’ show on Wontumi Radio.

According to the controversial media personality, she is not ready to back down from this scuffle and is in full gear to take it to the next level.