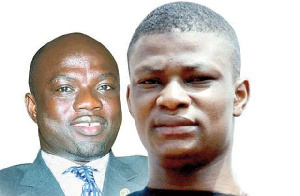 I stabbed J. B. Danquah with a jack knife – Sexy Dondon confesses

An Accra High Court has admitted into evidence, a pendrive containing video confessions of the prime suspect in the murder of the late Member of Parliament for Abuakwa North, Joseph Boakye Danquah-Adu.

Daniel Asiedu alias Sexy Dondon has admitted to stabbing the late MP during a scuffle when he went to his Shaishie residence on a robbery expedition.

According to a Dailyguidenetwork.com report sighted by GhanaWeb, the suspect demonstrated to investigators how he went into the deceased MP’s bedroom through his widow.

Details of his demonstration are contained in a video recorded during the interrogation of the accused as well as in a reconstruction of the crime scene in the late MP’s house.

Before the pendrive containing the videos was admitted into evidence, the court was told how Daniel Asiedu admitted that a catapult and a metal cutter found in the bedroom of the MP belonged to him. The court was told that the suspect admitted to using the catapult to ward off dogs when he goes into a house to commit robbery while he used the metal cutter to cut burglar-proof metals of windows that deny his access into the house.

“According to the first accused person (Asiedu), he did not use them because there were no dogs in the house and the windows were not having burglar-proof, so after the commission of the crime, he left them in the room of the deceased,” Chief Inspector Augustus Nkrumah, the case investigator told the court on Tuesday, July 19, 2022.

The video which was played in court, showed Sexy Dondon who has been charged with murder, demonstrating to police investigators how he squeezed himself through a metal fence into the house. He told them that, the security man on duty was sleeping when he entered the house.

The suspect also told investigators that he did not know the personality of the late MP prior to robbing him, and that, he only chose his room out of the lot in the house because it was the only one that had a light turned on when he entered the house.

Daniel Adu said the glass window leading to the MP’s room was not locked therefore he slid it open, entered the room and hid beside a drawer where he picked two mobile phones.

He said the sleeping MP woke up to turn off the television just when he was about to leave the room and spotted him. He said the MP shouted “thief, thief, thief.”

He then told the court that the suspect grabbed his shirt around the neck, firmly leading to a struggle between himself and the MP.

It was during the struggle that Asiedu said he stabbed the late MP with a jack knife which weakened him, and he sat on the floor beside the bed and could not scream for help.

Daniel Asiedu told investigators that he continued to search the room for valuables while the late MP sat helplessly and watched him do the searching.

During his reconstruction of the incident to the investigators, Daniel Asiedu in the video played in court, visibly broke down, went on his knees, placed his elbows on the late MP’ s bed and said a prayer after which he made a sign of the cross before he continued the demonstration.

Counsel for the accused, Yaw Dankwa objected to the tendering of the video into evidence. He argued that the accused was under duress and at all material times was in handcuff, tortured and deprived of sleep and also did not have a lawyer present when the videos were shot.

The presiding judge, Justice Lydia Osei Marfo , admitted the video into evidence stating that the weight to be placed on it is subject to the cross-examination of counsel for the accused person.

Joseph Boakye Danquah-Adu was killed on February 9, 2016, at age 50, at his Shiashie Legon Home.