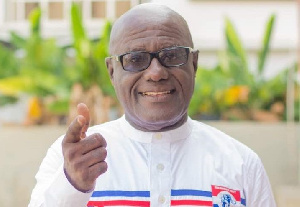 I still lost after paying GH¢1,000 to each delegate – Asare Bediako cries

Defeated aspiring Ashanti Region Chairman of the New Patriotic Party (NPP) Robert Asare Bediako has said he was surprised he lost the election after paying GH¢1k each to delegates for a votes.

While expressing concern about the seeming monitisation of politics in the country, Asare Bediako said he later discovered that his contenders gave more than what he offered to the delegates leading to his loss.

“Whiles I was paying each delegate GH¢1,000, I thought I would win but some paid more than me so the delegates also gave in to the highest bidder and it’s very worrying the trend of monetization in our body politics,” 3news quoted Robert Asare Bediako

The Ashanti Regional Chairman of the ruling New Patriotic, Bernard Antwi Boasiako alias Chairman Wontumi on Saturday, May 28, 2022 retained his seat for a third term after a tight competition.

His landslide victory over his main contender, did not come easy as Kumasi became the center of attraction on Saturday.

At the close of polls, Bernard Antwi-Boasiako retained his seat with 464 while Odeneho Kwaku Appiah also known as Chairman Coka his close contender got 306 votes.

Reacting to the results, Robert Asare Bediako called on the party members to put their grievances aside and ensure the party “breaks the eight” in 2024.

“After this election, let’s try and put behind all grievances and differences and back the elected executives to maintain NPP in power,” he said.