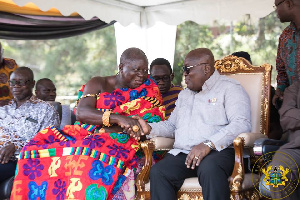 The Asantehene, Otumfuo Osei Tutu II, says he wants to see the completion of more asphaltic roads in the Ashanti Region before the expiration of the tenure of President Akufo Addo in 2024.

The revered King has therefore called on the ruling New Patriotic Party (NPP) government to ensure that all ongoing road projects in the region are completed before 2024.

According to him, with the Ashanti Region being the bedrock of the ruling party, residents will continue to demand more, adding that, it will be in the interest of the NPP to heed to demands public particularly those in the Ashanti Region.

The Asantehene Otumfour Osei Tutu II said this during the commisioning of the 100 killometres Kumasi City Inner Ring Road and Adjacent Streets Project at Kentinkrono on Monday August 1,2022, by the Vice President Dr Mahamadu Bawumia.

In a speech read on his behalf by the ‘Asakyirihene’  Nana Mensah Bonsu, the overlord of Asante Kingdom maintained that, it was incumbent on the government to streamline road infrastructure projects aimed at reducing congestion in cities across the country.

He commended president Akuffo for the completion of the 100 kilometres inner city road project and urged him to do more for the region.