Home / SPORTS / I will seize everything – Osei Kuffour threatens to storm Hearts of Oak office over $15,000 debt 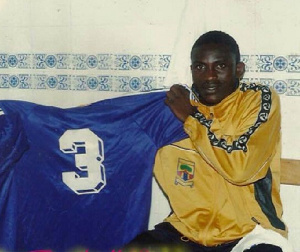 I will seize everything – Osei Kuffour threatens to storm Hearts of Oak office over $15,000 debt

Former Accra Hearts of Oak captain, Emmanuel Osei Kuffour, has revealed that he will take hold of everything in the club’s office if they fail to settle his $15,000 in bonuses for winning the CAF Champions League in 2000.

According to Kuffour, the management and the players put pen to paper and agreed on a $25,000 bonus for each player if they win the Champions League.

Speaking in an interview with Dan Kwaku Yeboah TV, the former Black Stars player said he got between $8,000 to $10,000 of the bonus.

“Yeah, we had money but they (Hearts of Oak) did not give us the money they promised us…$25,000 and I got about $8,000 to $10,000. They have not paid the balance. I heard that Charles Allottey raised this issue and they insulted him, they are lucky. They did not just promise us, we signed documents on it. Everyone was given a paper to sign,” he said.

He continued that, the mount he received came in bits and not in full.

“It came in instalments. You’ll be there and unexpectedly they come and share $2000 each to every player. It is disheartening. I have some files and I know that will find that paper there.”

Kuffour, who is now based in the United States, added that management made excuses at the time, but when he returns to Ghana, he will storm the club’s office and seize everything.

“We went and told them we need our monies, they said they were yet to receive money from CAF. Every they haven’t received money from CAF. There are certain things I don’t want to say in this interview but the day I’ll get to Ghana they will see. That day I will let you follow me with your camera. If they fail to give me my money I’ll seize their things.”

Hearts of Oak won their first continental trophy in 2000 after defeating Esperance de Tunis 5-2 on aggregate. Emmanuel Osei Kuffour scored three of the five goals, including one in the 2-1 first-leg victory and a brace in the 3-1 second-leg win in Accra.

He spent seven years with the Phobians, winning every trophy available to the club.

Watch the statement from the 7th minute