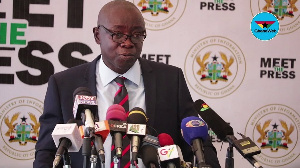 The Executive Director of the Alliance for Social Equity and Public Accountability (ASEPA), Mensah Thompson has described a suit filed against him by the Minister of Lands and Natural Resources, Kwaku Asomah-Cheremeh as a ‘clear attempt by public officials to gag and intimidate civil society organizations’.

Mensah Thompson is the subject of a GHC10m defamation suit by the Minister at an Accra High court.

In the writ of summons, Kwaku Asomah-Cheremeh stated that the ASEPA boss in a press conference accused him of extorting monies from galamseyers in the Western Region.

The Minister described the allegations as ‘untrue, baseless and have injured his hard-won reputation and lowered him in the eyes of the right-thinking members of the public”.

Reacting to the development on Angel FM’s mid-day news on Tuesday, April 28, Mensah Thompson confirmed receipt of the suit and dared the Minister to provide evidence to the contrary.

He questioned why the Minister will resort to court when there are other avenues, he could have used to seek redress if the claims made against him are untrue as he claims.

Mensah Thompson said that his lawyers have been notified of the suit and are ready to square it off with the Minister in court.

He asserted that his outfit tried to get a response from the Minister but their attempts proved futile.

“He hasn’t written anywhere or provided evidence to show that what we said is not true. As a public officer, in the discharge of your official duties, a civil society can raise concerns and you have any cause or reservations, you have a right of response.

“What he wants is for us to apologize but he hasn’t provided any evidence to disprove our claims. The substantive matter is in court and our lawyers are working on it. It is within his right to go to court. Public officers are accountable to the people so, in the exercise of their duties, people expect some level of respect for the work of civil society and the media. If he feels defamed and has gone to court then what is he trying to say. Does it when you are minister, no one can say something about you?

“When we got the information, we tried to reach to the Minister but couldn’t get him. When he heard our report, he could have also gotten back to us and provided evidence and we would have retracted and apologized. If we didn’t have evidence, we wouldn’t have made the statement. We have evidence to prove what we said and we will meet him in court. Some of can’t be cowed by these kinds of activities. You can’t intimidate us”, he asserted in an interview conducted in twi.