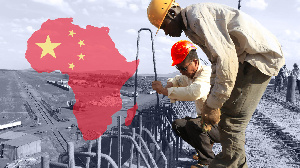 As China’s desire for large foreign investments have waned, infrastructure projects in a number of African countries have stalled giving a big blow to the governments.

As reported by Taipei Times, China has lent African countries hundreds of billions of US dollars as part of Chinese President Xi Jinping’s ambitious Belt and Road Initiative (BRI), which envisaged Chinese institutions financing the bulk of the infrastructure in mainly developing nations. But, the credit has dried up in recent years.

The big wrought from China came due to the economic slowdown, which experts attribute to the COVID-19 pandemic, the Taiwanese publication said.

“There is definitely a rebalancing from the China side,” said Tooze, whose new book, Shutdown, examines how COVID-19 affected the world economy, adding that Beijing’s current account surplus was “dwindling somewhat.”This is a big gust for African countries who were relying upon Beijing to develop infrastructural projects in their nations, Taipei Times reported.

“The pandemic has actually made things worse. Those numbers will go up,” African Development Bank President Akinwumi Adesina said, pointing at the need for additional infrastructure to support health services in the region.

Meanwhile, reports also suggest that at least one-third of the Belt and Road Initiative (BRI) projects have run into major implementation problems due to factors such as corruption scandals, labour violations, environmental hazards, and public protests.

As an example of one such project, Vietnam’s first elevated railway line in Hanoi suffered from years of delay with budget ballooning by more than 60 per cent of the original cost, Radio Free Asia reported citing a study by AidData.