Home / POLITICS / Is this the NPP’s winning ticket for 2024 elections? 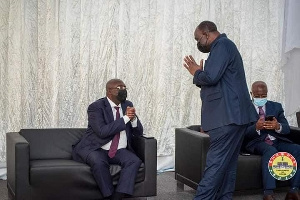 Is this the NPP’s winning ticket for 2024 elections?

In 2024 Ghana will once again go to the polls to elect a new leader and one thing is certain in that contest, Nana Addo Dankwa Akufo-Addo will not be on the ballot paper.

His two terms in office, as stipulated in the 1992 Constitution would be up and he will leave office having served for 8 years. As such, the New Patriotic Party (NPP)would have to elect a new candidate to square off with the candidate of their closest opponents, the National Democratic Congress (NDC).

Already, it appears the race as to who will lead the NPP in 2024 is a straight fight between Vice President Dr Mahammudu Bawumia and Trade Minister Alan Kyerematen. None has publicly stated their desire to lead the party but every student of politics knows they will be in the mix.

The impending race for the NPP flagbearer has led to unproven speculations and allegations that all is not well between the two potentially leading candidates. That belief and suspicion was heightened last week when President Akufo-Addo ostensibly snubbed both Dr Bawumia and Alan Kyerematen when he was looking for someone to read the 2021 Budget in the absence of Finance Minister-Designate Ken Ofori Atta.

Initial suggestions had leaned towards Alan Kyerematen, and then it shifted to Dr Bawumia.

President Akufo-Addo eventually settled on Minister for Parliamentary Affairs and MP for Suame, Osei Kyei-Mensah-Bonsu to present the 2021 budget to the house on Friday, March 12.

That decision it is believed was to avoid the situation where the one picked between the two would be seen as receiving the president’s endorsement way before the party goes to the polls to choose a leader to replace Nana Addo as leader of the NPP.

However, during the budget reading on Friday, March 12, the two personalities (Dr Bawumia and Alan) were seen demonstrating great camaraderie.

In a photo widely shared on Social Media, the Trade Minister, Alan Kyerematen with one hand raised is seen slightly bending to greet Dr Bawumia who was seated on a sofa. Bawumia with his hands clasped reciprocates the gesture in a show of respect. Another photo at the same event captures the two in an engrossing conversation after they exchanged pleasantries.

While the photos may to a certain degree douse the seeming or suspected tension it should not come as a surprise when things get heated, especially among supporters of these two when the time to elect a new leader of the party gets closer.

Or perhaps, the duo could be the winning ticket for the NPP come 2024. The big question though will be who will lead and who will be running mate?