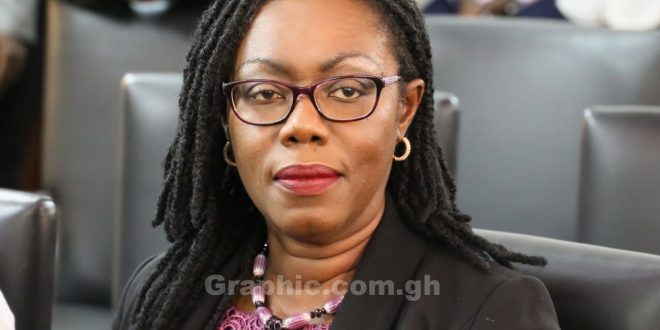 Communications Minister Ursula Owusu-Ekuful has been given a 48-hour ultimatum to appear before parliament to answer questions. Speaker of Parliament, Prof Mike Oquaye issued the directive after Mrs Owusu-Ekuful failed to honour an invitation for the third time.

Mrs Owusu-Ekuful was expected to provide answers in relation to the work of KelniGVG, a company awarded a $89m contract to independently monitor the revenue of telecommunication companies. Wednesday, August 8, was the third time the minister failed to appear and provide answers to questions filed by Member of Parliament for Ningo-Prampam, Sam George.

The MP submitted his question to parliament on May 25 to have information on the incremental revenue generated by KelniGVG since they commenced operations in 2018.

Professor Oquaye was concerned that Mrs Owusu-Ekuful did not submit any written answers in her absence. He, therefore, directed that the minister “makes herself available on Friday (August 8, 2020) to provide answers to the relevant questions”.

Prior to the Speaker’s directive, the Majority Leader, Osei Kyei-Mensah-Bonsu, told the House that efforts to reach the minister had been unsuccessful.

“Unfortunately, I have been trying to locate the minister,” he stated while explaining that if the minister appeared later within the day, she would be allowed to address the House.

He said the minister was capable of answering the questions so the House she give her an extension to make herself available.

But Minority Chief Whip, Alhaji Muntaka Mubarak Mohammed raised an objection that the minister had repeatedly failed to account to Parliament.

He, subsequently, told Joy FM he was very positive that the minister would be present of Friday because she is one of the people who are very punctual with parliamentary business.

He revealed that if she fails to appear before Parliament, that would be a breach of the rules of the House and the President could be compelled to remove her from office.

Kelni GVG was awarded a contract by the government for design, development and implementation of a common platform for traffic monitoring, revenue assurance, and mobile money monitoring and fraud management.

The biggest opposers of the deal was think-tank IMANI, which said the contract signed with the company did not make business sense and was not in the interest of the country.

President of IMANI Franklin Cudjoe said there was no point in appointing a company to provide revenue monitoring and assurance services when government cannot be assured of the amount of revenue it would get from the company.

The Minority also argued that the Ghana Revenue Authority (GRA) could do the job without spending huge sums of money to contract a private firm to perform the task.

The Communications Minister justified the move by indicating that government needed to plug the loopholes used by telcos to underpay taxes and levies owed government.

The CSO’s subsequently demanded copies of the contract and proceeded to court to compel the Communications Minister to release the documents.

An Accra High Court subsequently ordered the Minister of Communications to release the monitoring contract, awarded to Kelni GVG Limited, to three plaintiffs who had filed a suit seeking to annul the contract.

The court ordered the Minister to hand over the contract to the three plaintiffs – John Ato Bonful, Nana Ama Adom-Boakye Kanyi and Citizen Ghana Movement on or before July 9, 2018.