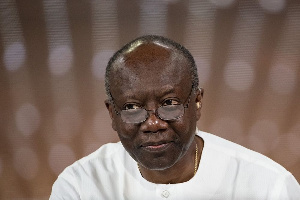 Finance Minister, Ken Ofori-Atta has given an update on his health status which was hitherto deteriorating.

In an interview with Accra-based Joy News on July 28, he said he was feeling much better compared to his previous status.

He further disclosed that he looks forward to a medical review in the ensuing week to determine the progress of his recuperation.

“[I’m doing] pretty good. I think I’m much much stronger than then. It’s been interesting managing health and work but we are good. I’m looking forward to a medical review next week and come back strong” Ken Ofori-Atta said when asked about how he was doing.

It will be recalled that the finance minister’s health status came under public scrutiny following changes in his looks.

Addressing the issue, Ken Ofori-Atta told Metro TV’s Paul Adom-Otchere on the ‘Good Evening Ghana’ show in November last year that, he has been diagnosed with jaundice and after some series of tests, it was discovered that his liver was inflamed.

He explained, “I got COVID in somewhere of November and got out of the hospital emergency maybe the 10th of December and came home. Things were pretty good, the COVID was gone, then, I began to feel jaundiced and so feeling quite unwell.

“I eventually got diagnosed that the liver was inflamed, therefore, it required some work to determine what was really happening. That took some time to begin to find the probable cure which involved steroids and all of that.

“So, I went back for review in August and the inflammation is pretty much gone and so, they are now titrating to see how to bring the steroids down so that one can get back to a normal life.

“But essentially pretty much minded and need to manage my rest and sleep and exercises and some good food,” Ken Ofori-Atta noted.

When asked if the good food will include some waakye, the Minister was quick to say that he is being careful with oil.

“But it is good. I think it was quite clear that the issue of prayers and intervention and all of that; and so we are very grateful to God and a lot of people who held us in prayer. But clearly, the DNA is strong enough to be able to do the work that we do,” he stressed.