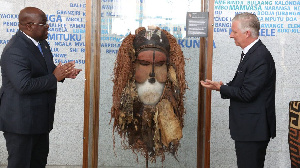 King Philippe, who arrived in Kinshasa on Tuesday for his maiden visit to Africa’s former biggest Belgian colony, was not even born yet when the mask was looted. But his visit was met with what his forerunner monarch King Leopold did to the Congo, including looting and plundering the country’s resources.

At the National Museum in Kinshasa, he promised a ‘chapter’ in ties between the two countries, handing back a mask to President Felix Tshisekedi in a ceremony attended by Belgian and Congolese government officials.

The mask had been looted and stacked away in Brussels more than 70 years ago by a Belgian researcher. It had been stored in a museum in Tervueren in Belgium.

The symbolic handover of the Suku mask may signal the restitution by Belgium to its former colony. This could see more artefacts, including traditional musical instruments and oratory objects, taken from the Congo during its colonisation by Belgium when it was known initially as the Independent State of the Congo (1885-1908) and Belgian-Congo (1908-1960).

Locals used the mask in healing and protection rituals, according to King Philippe, himself a student of political science.

“Mr President, it is a joy to officially hand over this mask to you. I wanted, at the time of our visit to the national museum, to give you an exceptional example so that the Congolese could discover and admire it,” the monarch said in Kinshasa.

“It is an art object made in Congo and collected more than 70 years ago by a researcher from the Tervuren museum. It marks the symbolic beginning of the strengthening of the cultural and museum collaboration between the Kingdom of Belgium and the DRC.”

Belgium, which also colonised neighbouring Rwanda and Burundi, has been accused of plundering DRC during its exploitative years of colonialism. But the offer to return stolen objects may be followed by demands for more. Belgium had already promised to return the tooth of former Prime Minister Patrice Lumumba, assassinated shortly after the country gained independence.

For Belgian Prime Minister Alexandre De Croo, “the restitution of cultural goods acquired during the colonial period is part of the new chapter that Belgium and the DRC are starting. This new chapter is one of dialogue, respect and equality”.

According to Belgium, 35,000 historical objects kept in the Tervueren Museum could be returned to the Congo in a progressive manner. This could be a long process. But some experts estimate that “1,500 to 2,000 objects could be returned immediately because they come from acts that were already illegal during the colonial period”.

Mr Alexandre De Croo handed over a list of these objects to his Congolese counterpart Jean-Michel Sama Lukonde in February this year.

On the occasion of King Philippe’s visit to the DRC, Belgium and the Congo signed agreements in the cultural field that provide for collaboration between the national museum in Kinshasa and the one in Tervueren, in Belgium.

Previous Council of State: Why pay ex-gratia to people when the president has so many advisers – Dr. Baah
Next ‘Ex-gratia is a lexicon not in the Constitution’ – Inusah Fuseini