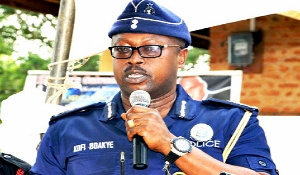 The Bono Regional Chairperson of the New Patriotic Party, Kwame Baffoe popularly known as Abronye DC, has said that Commissioner of Police, Kofi Boakye, is eligible to be the next IGP.

According to him, Kofi Boakye is a very knowledgeable person who can bring to bear his intelligence in the police service should he be given the nod to lead.

“Even in Law School, he was the best student in all the seven courses he was reading”, Abronye said in the Twi parlance to solidify his stance.

He made these remarks on Angel FM’s Anopa Bofo Breakfast Show on Thursday, February 17, 2022.

Describing the Commissioner of Police as his brother, the NPP Regional Chair also noted that Kofi Boakye is a gentleman by all standards.

Kofi Boakye is a Commissioner of Police in charge of Research, Planning Monitoring and Evaluation at the Ghana Police Headquarters.

He served as the Regional Commander of the Greater Accra Region, Western Region and the Ashanti Region of Ghana.

He was the Director General Operations of Ghana Police, Commissioner in Charge of Professional Standards Bureau among others.

Previous Three players to be called up by Otto Addo for Nigeria test
Next Transport fares to go up Feb. 26, GPRTU in talks with govt over percentage