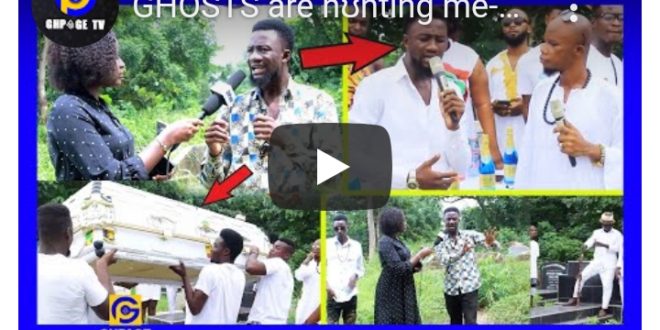 On May 23, 2022, GhanaWeb reported a story about a young man who celebrated his birthday at a cemetery after videos of the party went viral.

In a recent interview by the young man on GHPage TV, Samuel Nkrumah, popularly called Remes Kay in the showbiz industry, has said that he is being tormented by some unknown forces following the decision to host a birthday party at the cemetery.

According to the actor, it’s been three days after his birthday celebration and he is being tormented by some forces.

“Whenever I sleep, I see people holding my hands and escorting me into my room and when I wake up, I will indeed be in my room and not gone anywhere. The new thing is, I sense a presence shaking my door and trying to open it.

“Sometimes, a heavy banging on my window as if someone is angry because they can’t find me so they bang on my window and mention my name ‘Remes, Remes, are you there’. It is more like a nightmare. It is as if something is calling to you or tormenting you for three days,” he narrated.

He also mentioned that on the day of the interview, he saw three people outside of his window at dawn but he checked again and saw two.

Explaining further, he held that all the people did was stand with their backs facing him and he couldn’t tell if they were men or women.

“At dawn, I saw three people who were waiting for me. When I opened my curtains, I saw two people with their backs facing me and it was hard to tell if they were men or women. I have contacted some pastors and they are refusing to pick up my call or so, I’m not sure or attend to me,” he added.

Although many have alleged that what he did on his birthday was somehow related to a ritual, he has thrown the thoughts shared by many into the gutter stating the real reason behind his birthday in the cemetery.

According to the actor, it was his director’s idea to host his birthday at the cemetery to send out a strong message that as we grow older, we are only nearing our death.