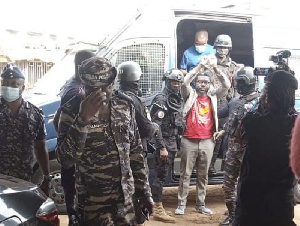 Lawyers for #FixTheCountry convener, Oliver Barker-Vormawor, have filed a lawsuit at the Supreme Court against the AG and the IGP for their decision to prosecute Barker-Vormawor at a district court.

According to the lawyers, they want the highest court of the land to determine whether the AG (Attorney General) and Inspector General of Police (IGP) are right to prosecute their client in a court that can not consider a bail application, myjoyonline reported.

The lawyers say they also have issues with the judgment of the district court judge, His Lordship Justice Daniel Mensah, regarding the lawfulness of the detainment of their client.

The Supreme Court is expected to hear the application of the lawyers on Wednesday, March 2, 2022.

Read excerpts of the motions by the lawyers below:

a. “Make an order of certiorari to issue to the High Court ‘B’, Tema, to bring up to this honourable court to have quashed its ruling dated February 17, 2022, which was given under the hand of His Lordship, the judge, Justice Daniel Mensah, J., refusing to issue a writ of habeas corpus subjiciendum in respect of the Detained directed at the Respondents, their agents, assigns and workmen howsoever described or styled.

c. “Issue a writ of habeas corpus subjiciendum in respect of the Detained directed at the Respondents, their agents, assigns and workmen howsoever described or styled.”

Meanwhile, the #Fixthecountry Convener was thrown out of court by Her Honour Eleanor Kakra Barnes Botwe, following a heated argument between him and the judge during proceedings on February 28, 2022.

Barker-Vormawor was arguing with the judge on whether the court had the jurisdiction to prosecute him.