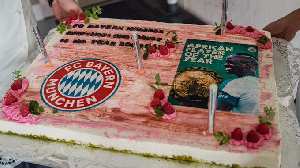 Mane was last week crowned the Confederation of African Football’s best men’s player of the year at the 2022 CAF Awards held in Morocco.

The player was presented with a big cake at an event attended by most first team players and staff.

Oliver Khan, a top club official, is heard telling Mane about the significance of winning the award for the second time.

All his teammates applaud him as he receives the cake, which has his face and the club logo embossed on it with lighted candles. Mane, all-smiles, also acknowledges their gesture.

Mane recently joined the Bavarian giants from Liverpool after spending about seven years with the English Premier League giants.

This is his second straight CAF award having won it last year. He beat off competition from former teammate Mohamed Salah (Liverpool, Egypt) and Edouard Mendy (Chelsea, Senegal).

The Bayern celebration has ignited debate on social media about how he was celebrated by the club as compared to the ‘silent’ treatment Liverpool meted out when he beat Salah last year to the award.

Reports emerged that Mane had asked against a club celebration in magnanimity to Salah who had also lost the African Cup of Nations to the Mane-inspired Senegal team in Cameroon.

Senegal will go on to inflict more pain on the Egyptians after denying them a place in the 2022 World Cup in a two-legged play-off that was decided on penalties.

Watch the Bayern show for Mane below: