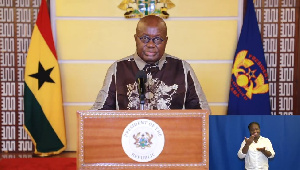 LIVESTREAMED: Akufo-Addo’s 22nd address to the nation on measures to fight coronavirus

President Nana Addo Dankwa Akufo-Addo delivered his 22nd update to the nation on the measures his government is taking to combat the spread of the novel COVID-19 among Ghanaians.

The President’s 22nd update comes after Ghana recorded its first two cases of COVID-19 in March 2020.

This is also President Akufo-Addo’s first televised update after he was sworn in for a second term on January 7.

This number has seen an increase.

Akufo-Addo’s regular update described as ‘Fellow Ghanaians’ has been a major way of keeping Ghanaians informed on the COVID-19 situation in the country.

Watch below the President’s address.