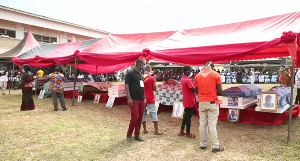 Families of the thirteen teenagers who got drowned on March 7 after they went swimming in the sea at Apam in the Gomoa West District of the Central Region will be bidding their loved one’s goodbye.

A mass burial ceremony is being held in the Apam Community this morning to bid farewell to the teenagers who ranged from the ages of 12 and 17.

A government delegation led by Fisheries and Aquaculture Minister, Mavis Hawa Koomson are in attendance to support the families of the departed.

The township of Apam and neighbouring areas have been thrown into a state of mourning after some of their children numbering over 13, reportedly went missing after they had gone swimming on Sunday, March 7, many of them drowning.

Confirming the incident and detailing the numbers as far as deceased persons and survivors are concerned, the spokesperson of the Apam Fishermen Association, Kow Panyin, told GhanaWeb that 11 of the teenagers who drowned have been identified.

Of the deceased persons, 2 were females and 10 of them males.

Another victim, a 14-year-old boy was washed ashore on March 11 bringing to 13 the number of drowned teenagers.

Watch a livestream of the burial ceremony here: