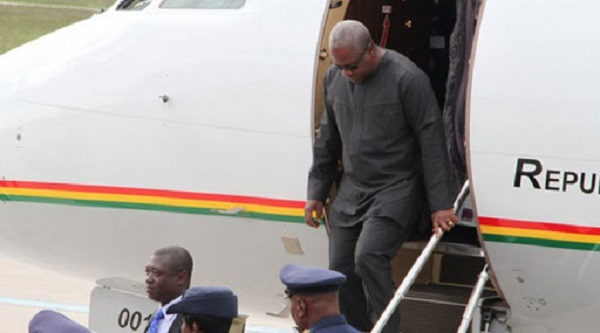 Member of Parliament (MP) for Kwadaso, Dr. Kingsley Nyarko, has stated that President Nana Addo Dankwa Akufo-Addo is not the only president who has travelled outside the country using a hired private jet.

The MP in an interview on the Asaase Breakfast Show said, other former presidents have in the past also rented jets when the need arose.

In the case of former President John Dramani Mahama, the MP alleged that he [Mahama] hired a jet at a cost of US$11,000 an hour to ferry him to Scotland to receive an award.

“Nobody complained about that. He travelled to receive an honourary doctoral degree in Scotland. That has nothing to do with business transactions that will affect positively the fortunes of the country,” he said on Accra-based Asaase Radio on February 15.

The issue of President Akufo-Addo’s foreign trips has become a topical issue in recent times.

North Tongu MP, Samuel Okudzeto Ablakwa, has been on the heels of the government demanding answers to the cost of the travels as the president charters a ‘luxurious private jet’ at the expense of taxpayers.

Ablakwa in his latest assessment of the cost of the president’s foreign trip said taxpayers will pay US$77,600 daily on Akufo-Addo’s private jet during a 10-day working visit.

On Thursday, February 10, 2022, the president left the shores of the country on a working visit to France, Guyana, Belgium, Germany and the United Kingdom.