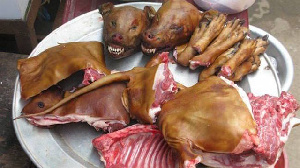 Man killed over dog meat; chief, 8 others in police grips

Angel News’ Kwame Owusu Asante Shadrack reported that the deceased, 46, was struck with a stick on his head and suffered some bruises on his neck when a misunderstanding ensued among the three persons over dog meat.

A brother of the suspect, called Kwame, is said to have confronted the deceased, Daniel Akoto, about his missing dog.

The deceased, however, told Kwame that his brother, Sankara, had invited him to a dog party which he declined because he [Daniel] didn’t know the source of the dog meat.

Daniel, therefore, suggested that Kwame questions his brother about the whereabouts of his missing dog.

But Kwame, who got infuriated by the revelation, confronted Daniel with a stick and in the process of the altercation hit him with it.

The deceased, who was bleeding profusely through his nose and ears, reported the case to the Unit Committee Members of the area.

However, on his way to the hospital, Daniel died and the Committee members secretly buried him.

The District Police Commander of Assin Praso, DSP Moses Osakonor, confirming the incident said, the Unit Committee Secretary, Swanzy Lumor, and Gideon Zorve, who is also the brother of the deceased, have also been arrested for masterminding the burial without authorisation from the police and the court.

The police are on a manhunt for the chief, Nana Ahiator IV, and elders of the community for releasing the land for the burial without following due process.

DSP Osakonor added that an exhumation order from the court will be secured for the body to be exhumed to undergo autopsy as part of the investigation.