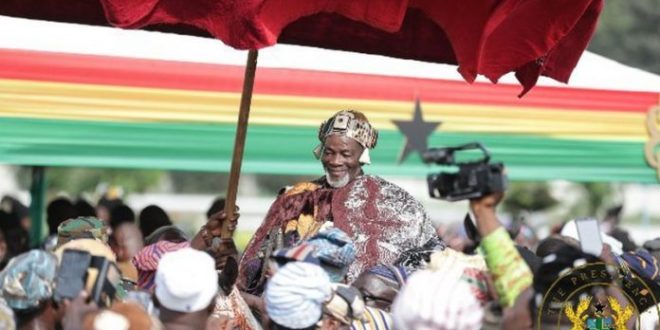 The Overlord of Dagbon, Ya-Na Mahama Abukari II says his peace drive in Dagbon has resulted in the enskinment of 25 chiefs from the vacant 36 skins.

According to him, the development has led to the performance of final funeral rites of some late chiefs whose skins were in dispute.

Presenting himself to President Akufo-Addo at the Jubilee House on Thursday, Ya-Na Abukari reiterated his commitment to using his reign to resolve all outstanding disputes and asserted he will not tolerate any act that seeks to further destabilise Dagbon.

“In the past year of my reign, I have worked alongside the court and my advisor to foster a sense of unity in Dagbon. It is gratifying to announce that out of the 36 vacant skins made available on the performance of funerals if deceased chiefs, I selected and enskinned 25 members of the Abudu family and 11 members of the Andani family.”

President Akufo-Addo indicated development can only take place in an atmosphere of peace. While touting the Ya-Na’s prowess in that regard, he also reiterated the government’s commitment towards giving the northern regions a facelift through numerous ongoing projects in the area.

“I was confident that he would discharge his duty with distinction as he as a man of experience and dignity. Thus far, I have not been proven wrong. We are a government determined to exploit and add value to the iron ore deposits at Sheini, finish the second face of the Tamale Airport project and construct the Tamale interchange, the first of its kind in the northern sector of the country”

Ya-Na Abubakari Mahama was selected by Dagbon Kingmakers January 18, 2019, in Yendi after a peace process by the Committee of Eminent Chiefs, led by Asantehene Otumfuo Osei Tutu II.