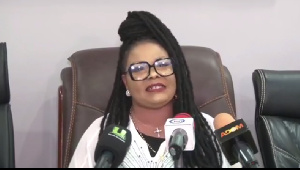 •Agradaa pleaded not guilty initially but amended her pleas, based on which she was sentenced

Patience Asiedua, a self-acclaimed evangelist has been handed a fine of GH¢46,000 for operating television channels without certification and displaying what the court deems to be ‘charlatanic material.’

Agradaa according to court documents was fined GH¢36,000 for operating TV without appropriate document from the authorities.

Failure to pay the said amount will see her spend three years in prison with hard labour.

She was also fined GH¢10,000 for the display of charlatanic materials on live television. A default in payment will see her spend another year in prison.

The prison sentences will run concurrently as per the report.

Nana Agradaa was arrested on April 22 by a joint team of police and national security operatives who raided and shutdown her two television stations.

Agradaa was charged with offences of charlatanic display contrary to section 137 of the Criminal Offences Act, 1960. She was charged under section 110 of the Electronic Transaction Act 2008, Act 772.

On April 22, Agradaa pleaded not guilty to the charges and was granted a GH¢500,000 self-recognizance bail.

Agradaa denounced her ‘gods’ and announced her conversion to Christianity, adopting the name ‘vangelist’ Patience Asiedu.

Previous Meet the 15 Highest Paid Presidents In Africa 2021, Akufo-Addo’s Position Will Shock You
Next Bullion van killing: My instincts to get ‘Akpeteshie’ GH¢1 saved me – Eyewitness