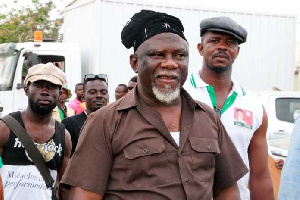 The First National Vice Chairman of the National Democratic Congress(NDC) Sofo Awudu Azorka has been robbed of his money, car and iPhones.

The Northern Regional Police Command is on the heels of suspected armed robbers who snatched a Land Cruiser V8 belonging to the First National Vice Chairman of the National Democratic Congress(NDC) Sofo Awudu Azorka.

The robbers numbering three also took away two apple 13 iPhones valued at GHc19,000.00 and some unspecified amount of money at his residence in Gbanyamle near Islamic SHS in Tamale.

The police who confirmed the incident that happened on Tuesday dawn in a statement said” The Northern Regional Police Command is pursuing three robbery suspects who robbed a victim at gunpoint and made away with his White Toyota Land Cruiser V8 2017 registered vehicle, with two apple 13 iPhones valued at Ghç 19,000.00 and some unspecified amount of money at his residence in Gbanyamle near Islamic SHS, Tamale.

The Northern Regional Police Commander has spoken to the victim and an anti-robbery operation is underway to get those involved arrested. Further updates will be provided in due course.

Last night about 11:45pm, when I returned from town, as the usual routine, I packed outside and got down to open the gate and when I opened, I saw a certain guy walking on my compound although the gates were heavily locked up.

So I rushed towards him to find out his mission in the house living whilst the car was out with the engine on. He quickly jumped over the wall.

I made an attempt to rush back to the main entrance to check if the guy will be passing through to the other end, when I got to the entrance, I then saw another group (at least 3 guys) quickly entering my car and sped o

I tried but had no traces of them. So I lodged a complaint at the nearest police station and was assured of a full investigation instituted into the matter.

They made away with my vehicle (the one in the picture), documents, phones, an unspecified amount of money and other valuable accessories.

As I write, there has been no news about the stolen vehicle or the people who were sent to my house for whatever unknown purpose for which they had to resort to stealing the vehicle.

The Ghana Police Service has launched full investigation into this matter and is bent on following up until its conclusive end.

I want to thank the families, party leaders and teaming party faithfuls who have called, texted and come visit to check on my health.
I am very healthy and safe

I want to debunk some false media reportage that I have been robbed at a gun point. It is a fabricated story with complete falsehood.

Only Allah can unmake us!