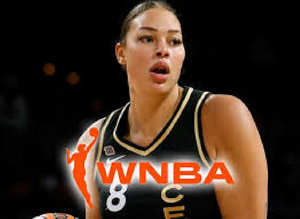 Some players on the Nigerian women’s national basketball team allege WNBA star Liz Cambage hurled racial slurs at them during a scrimmage in preparation for the 2021 Tokyo Olympics. The allegations against the Los Angeles Sparks and Australian women’s national basketball team star were made by anonymous Nigerian players who spoke to the Daily Telegraph (Australia), per New York Post.

The Nigerian players allege that Cambage, whose father is Nigerian, referred to them as “monkeys” and told them “go back to your Third World country.” The alleged hostility reportedly stemmed from an altercation during the Olympic warm-up match. The 30-year-old is also said to have elbowed one of the Nigerian players and slapped another.

“That’s what I recall, the term monkeys, yes. And go back to where you came from,” an anonymous Nigerian player told The Telegraph. “She definitely did use monkeys or monkey.”

“I was on the court. She definitely said go back to your Third World country,” another player also claimed. “I didn’t hear it, but [teammates] confirmed she called us monkeys.”

Australian officials ended up pausing the game before the conclusion of the second quarter as a result of the incident. And though Cambage apologized to her opponents, the African players said they did not think she meant it.

“Although she’s Australian, we knew she was half Nigerian. So, before then, it was like she was one of us,” another Nigerian player said. “That was another thing to cut deep, for her to do that and not show any remorse at all.”

Cambage did not join her Australian compatriots at the Tokyo Olympics because of mental and physical health issues. And the allegations by the Nigerian players came after Cambage criticized the Australian women’s national basketball team around the beginning of this month, New York Post reported.

Meanwhile, Cambage took to Instagram on Monday to deny the allegations. In her post, the 30-year-old claimed that the incident in question was “handled privately, almost a year ago.”

“I am very disappointed and hurt by the events and accusations that have unfolded in the Australian media. The recount of what took place is inaccurate and misleading,” she added. “I did not use the racial slur towards the Nigerian team that has been circulating.”

She continued: “After I unintentionally fouled a Nigerian player on the court I was then physically assaulted by this player on the sideline of my bench. I was hit in the face and pushed to the ground but I walked away. Prior to the game, I asked to sit out because I was concerned about my mental and physical health, which I have addressed publicly. We did not have professional referees to manage and prioritise both teams’ safety during this highly physical scrimmage.

“This is not an excuse or justification for the events that unfolded or my actions, however, I feel that a full picture of the environment that led to this outcome must be shared.”

“I have taken responsibility and accountability for my involvement in what occurred,” Cambage said.

“I genuinely apologised to the Nigerian team and I once again, am sorry that these events are being rehashed. I truly hope that I can move forward from this incident and apply actionable effort to be my best self.”