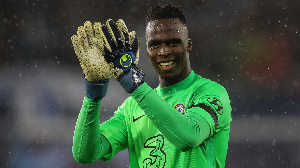 Abedi Pele won the first edition of the award in 1992

The 2021 awards feature only one footballer

Ghanaian sports personalities have been left out of this year’s BBC African Sports Personality of the Year award.

The award which is held to celebrate the most outstanding sporting personalities across the continent did not feature any Ghanaian in all the categories.

The sports personalities who have been nominated for the 2021 BBC African Sports Personality of the Year award are Kenyan athletes Eliud Kipchoge and Faith Kipyegon, Ntando Mahlangu, Christine Mboma, Édouard Mendy and Tatjana Schoenmaker.

A panel of experts including administrators, journalists and coaches came together to determine the six contenders who will compete for the public vote.

Despite winning bronze for Ghana in boxing at the Tokyo Olympic Games, Samuel Takyi failed to make the nomination cut.

The last time a Ghanaian was nominated in the BBC awards shortlist was in 2018 when Thomas Partey was nominated alongside Medhi Benatia (Morocco), Kalidou Koulibaly (Senegal), Sadio Mane (Senegal) and Mohamed Salah (Egypt) the ultimate winner.

Since then, other Ghanaians including Samuel Osei Kuffour, Michael Essien, Asamoah Gyan and Andre Ayew have all won the award.

Source: www.ghanaweb.com
Related Topics:bbc
Up Next

Meet Sumaila Abdallah: The only Ghanaian to win FIFA award