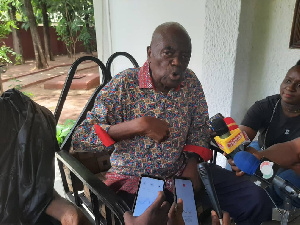 NPP Council of Elders summons Wontumi, others over election disputes in Ashanti Region

Ashanti Regional Chairman of the New Patriotic Party, Bernard Antwi Boasiako (Wontumi), and other party executives are expected to hold an emergency meeting with the Council of Elders of the party as it takes steps to resolve all election-related disputes in the region.

The elders were at the Asokwa Magistrate Court on Monday (11 April 2022) to push for an out-of-court settlement in the case involving some party members who were charged with rioting after locking up the Subin Constituency party office last month.

The accused persons launched the protest against what they said were infractions in the recently held polling station elections in the constituency.

The presiding judge Akua Boahene declined the request for an out-of-court settlement and directed the case to the Alternative Dispute Resolution (ADR) center as she adjourned the case to 9 May 2022.

Counsel for the 13 accused persons, Annis Moghtar Mohayideen, said the Council of Elders can still pursue their request for an out-of-court settlement.

“The court asked that the parties settle their differences through the Alternative Dispute Resolution channel. The Council of Elders, can, however, still pursue their request for the matter to be settled out of court”, he said.

An internal election to pick new officers of the NPP has been characterized by violence and lawsuits. Elections in the Mampong, Manso Nkwanta, and other areas have been put on hold due to legal tussle.

The meeting is expected to be held on Wednesday (13 April 2022), dailymailgh.com has gathered. Chairman of the Council, Rev Mark Adu Gyamfi believes their intervention will put matters to rest.

“This is a political issue and must not be settled in court. We are meeting all the executives on Wednesday [over these issues] and tell them our piece of mind. As a party, we should be able to settle our issues out of court. So, henceforth, we are giving them the notice that they should never go to any court for resolutions without our permission, if they have to, we will recommend the court to them. We want all our party issues settled by ourselves.”

Previous Shatta Wale and I are not a duo – Medikal clarifies
Next Sulley Ali Muntari sued for €97,320 – Report