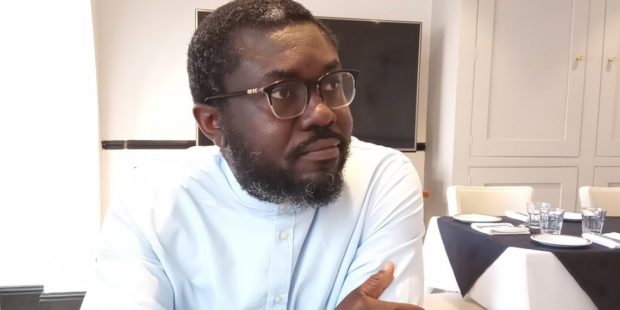 Oliver Barker-Vormawor back in court today

The case involving the #FixTheCountry Movement convener Oliver Barker-Vormawor, is expected to be heard at the Ashaiman District Court later today [Monday, March 14, 2022].

Mr. Vormawor is facing the charge of treason felony over allegations that he has instigated members of his group to overthrow the government.

He has been in the custody of the police since February 11, 2022, when he was arrested at the Kotoka International Airport.

Meanwhile, the application for bail by Oliver’s lawyers is expected to be called at the Tema High court.

Mr. Oliver Mawuse Barker-Vormawor, Convener of the Fix the country movement, is still in police custody after an application for bail by his lawyers was not granted by the Tema High Court when he appeared before it last Thursday.

The court presided over by Justice Daniel Mensah, adjourned the case to today, Monday, March 14, 2022, for the accused’s lawyers to go through an affidavit filed by the Attorney General’s Office opposing the bail application.

The AG among other things said Mr. Barker-Vormawor was not cooperating with investigations and did not have a permanent residence address in Ghana.

In his reply to the Attorney-General’s affidavit in opposition to the bail application, Mr. Barker-Vormawor insisted that he was first picked up at 5 pm on Friday, February 11, by two armed, unidentified men at the Kotoka International Airport upon his arrival into the country who interrogated him amidst assault, abuse, intimidation, and harassment.

He said his demands to know their names and the reason for their manhandling only attracted more abuse from the men who were by now 4; while they demanded of him to unlock his phone for them.

The activist also insists, in his reply to the Attorney General that he has a fixed place of abode in Accra where he lives and has personally led the police to the place on February 17, under a court warrant.

He says that though he’s a postgraduate student at the University of Cambridge, he has no fixed place of abode neither in England nor anywhere else abroad.

In further reply to the Attorney-General, Mr. Barker-Vormawor denies not cooperating with police investigations.

He insists he has “fully cooperated with the police throughout [his] arrest, detention, and interrogations. He says for instance that he has complied with two search warrants dated February 17, and March 3, to be executed on his premises.

Previous Passengers injured in accident on Bimbilla-Yendi road
Next How Nigeria seized over 8,600kg of loud cannabis transloaded via Ghana on March 6