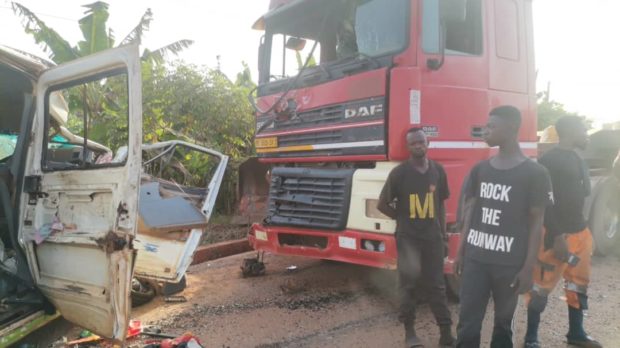 One person is feared dead while 20 others have sustained various degrees of injuries after the vehicle they were travelling in was involved in an accident at Atwima Denkyemuoso in the Kwadaso Municipality of the Ashanti Region.

Some eyewitness in an interview with OTEC News Kwame Agyenim Boateng disclosed that the speeding sprinter bus collided with the Lowbird truck after using a wrong way.

“The sprinter bus was fully loaded and was heading from Kejetia to Abuakwa – Agogo but the driver used the wrong way leading to the collision “.One Mr Joe, a taxi driver noted. “This is a double road and the sprinter bus driver did not only used the wrong  way but was also on top spreed that to me lead to this gory accident.” Mr Joe added. Police officers from Atwima Denkyemuoso – Takyiman Divisional Police Command who rushed to the scene helped conveyed the injured to hospital for treatment.